Still, Polikoff agreed with me that public attitudes have changed a lot since the 1960s — fortunately for the better.

For example, in 1973 the General Social Survey and The Washington Post found that 64% of white Americans said they would vote for a law allowing homeowners to discriminate in selling their house. In 2014, that portion shrunk to only 28% while 70% thought such discrimination should be legally barred. 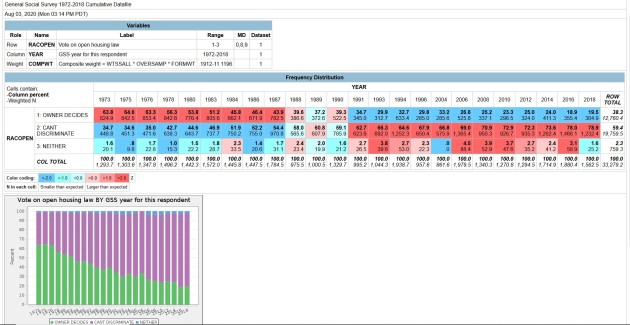 That the attitudes of Americans has improved on this subject is good. Using GSS data through 2018 (variable racopen), the question about racial discrimination has improved even further: only 19.5% of respondents believe the owner decides regarding discriminating in housing. Indeed, multiple measures of attitudes on race have improved since the early 1970s.

Yet, the data is still disheartening in two ways:

2. Overt housing discrimination does not need to occur to keep people out of housing or communities. Several other methods are utilized. Zoning is where communities set guidelines regarding what can and cannot be built. Communities can make it possible only to build expensive housing or only single-family homes or that lots need to be of a certain size. These guidelines make housing more expensive by limiting the housing supply and encouraging builders to construct more expensive housing to make more profit. Those with fewer resources then cannot rent or purchase properties in a more expensive area. The paucity of cheaper housing can then be explained away by local preferences or the inability of people to have the resources needed to access the community. Zoning can also limit the abilities of religious groups to gather (examples here and here). A second method is to make others feel less welcome. This can happen in more active ways such as through negative interactions with local residents (see examples here from one suburb), arguments about sending which kids to which local schools (suburban examples here and here), or arguments about local policies (such as English-only documents and signs). This can also happen more passively: what groups and ways of life are celebrated? What kind of diversity is welcomed? What kind of language is used regarding the community (a suburban example here)?

All of this hints at a basic sociological point: racism does not need mean, overt racist individuals to exist. The reality of suburbs includes exclusion and both overt and covert means are used to discourage certain residents from living in certain suburbs.