Recent surveys suggest a majority of Americans don’t want to hand over their steering wheels yet:

Autonomous autos are advancing so rapidly that companies like Uber Technologies Inc. and Alphabet Inc.’s Waymo are beginning to offer robot rides to everyday consumers. But it turns out the traveling public may not be ready. A recent survey by the American Automobile Association found that more than three-quarters of Americans are afraid to ride in a self-driving car. And it’s not just Baby Boomers growing increasingly fearful of giving up the wheel to a computer, a J.D. Power study shows — it’s almost every generation. 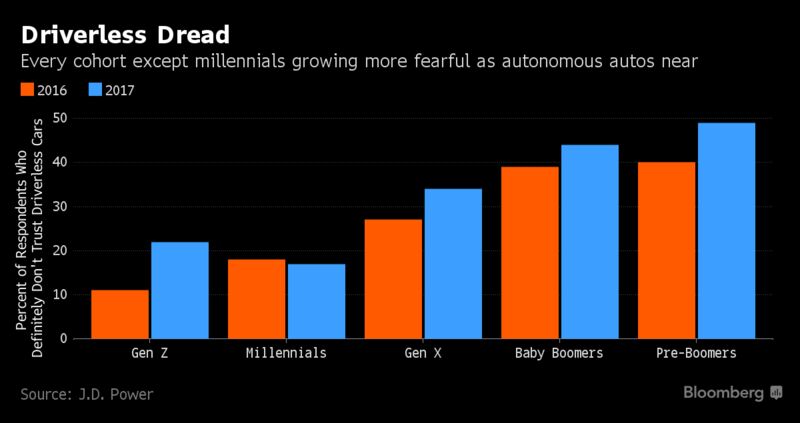 Consumers will only become comfortable with driverless cars after they ride in them, Mary Barra, the chief executive officer of General Motors Co., said this week. The largest U.S. automaker is testing 180 self-driving Chevrolet Bolts and ultimately plans to put them in ride-hailing fleets, though it won’t say when…

Dangerous as it may be to operate cars themselves, many drivers are anxious about autonomous technology because they associate it with the fragility of electronic devices. Laptops crash and calls drop with nagging regularity. The consequence of a computerized car crash is much greater.

Americans tend to like technology: we like progress and new and exciting options. Is the fear related to safety or also connected to how Americans view driving (despite all the hours spent commuting and stuck in traffic, Americans like the freedom it offers)?

I’m guessing this fear will drop within a few years as stories of mishaps become normal (and even the occasional mishap would be safer in the long run compared to the tens of thousands of Americans killed each year in vehicles) and the technology improves. Could we also imagine a scenario where governments impose self-driving vehicles because of their improved safety?