The suburbs are a key feature of American life. From the mid-1850s when Americans first started to conceive of daily life lived outside the outskirts of major cities to growing suburbanization in the 1920s to the post-World War II suburban boom, much of the country’s history has involved aspirations for suburban living and the moves of millions to the suburbs. A 2004 Census Bureau report about demographic trends in the twentieth century highlights the scale of this trend between 1910 and 2000: 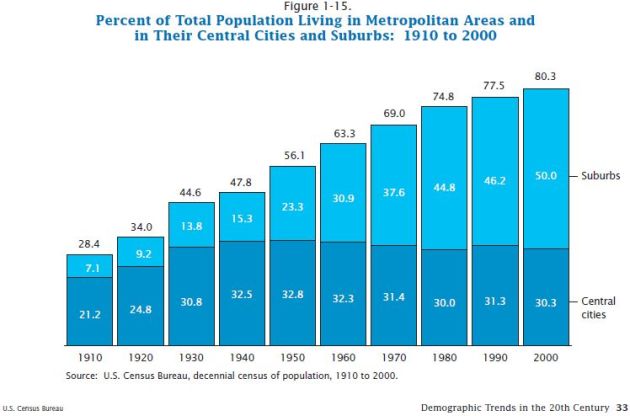 Much of this suburbanization occurred even as critics blasted suburbia for its mass-produced landscape, conformity, middle-class values, exclusion of non-whites, limited roles for women and teenagers, use of land and resources to the detriment of the environment, and poor imitations of nature.

And, still, Americans kept moving to the suburbs. Younger Americans want to move there even if they are having a hard time buying a house. Blacks who were once excluded from most suburbs are now moving there in large numbers. They may even like them.

This blog does not feature many intentional series of posts even though certain storylines have developed over eight years of thoughts. This is an exception intended to distill many earlier posts and scholarly research into one series. Each day for the next six days, I will discuss one reason Americans love the suburbs. While these reasons are difficult to rank, these are in rough rank order based on my own interpretation of the scholarly literature. No single reason can explain the suburbs on their own but some factors are more important than others.

3 thoughts on “Why Americans love suburbs: An introduction and seven parts”