If the economy is going well, the trucking and railroad industries have plenty of work to do: 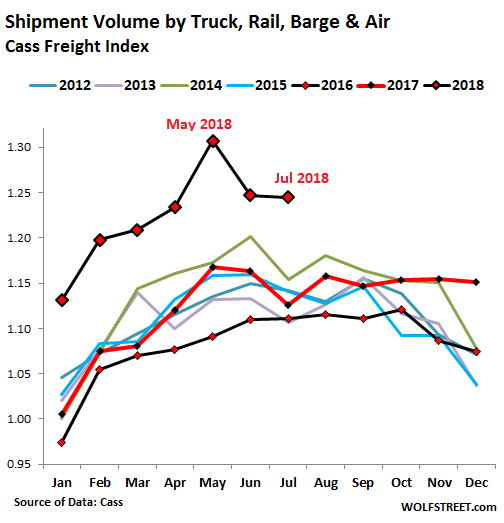 The dynamics in the transportation sector are “clearly signaling that the US economy, at least for now, is ignoring all of the angst coming out of Washington D.C. about the trade wars,” the report by Cass said.

The Cass Shipments Index does not include shipments of bulk commodities, such as grains or chemicals. But shipments of commodities were strong too, according to the Association of American Railroads. Excluding the carload category of coal, which is facing a structural decline in the US, carloads rose by 6.7% year-over-year, including grain, up 14.7%; petroleum & petroleum products, up 27%; and chemicals, up 4.6%. Of the 20 commodity carload categories, only five showed declines, including nonmetallic minerals, metallic ores, and the biggie, coal.

And intermodal traffic – shipments of containers and trailers via a combination of rail and truck – surged 6.9% in July compared to July last year, the AAR reported.

At the least, this is just a reminder of how goods make their way to stores and eventually buyer’s residences. Those trucks and trains may be a nuisance when you want to get where you want to go but this is how it works in our society.

A few other thoughts: