The new Peytonville commercial from Nationwide includes shots of a football stadium on a college campus: 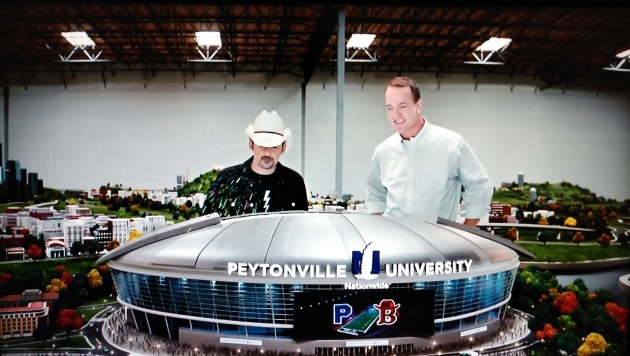 From exterior appearances, this might be the fanciest stadium in college football. Yesterday, I wondered if people would more likely place Peyton Manning in his college days or in his long NFL days. The stadium in this commercial is an NFL stadium with its shiny exterior, almost complete roof, and scale. This stadium does not fit on the traditional looking college campus featured earlier in the commercial; this stadium belongs among the gleaming offices and condos in an urban center.

Is this a hidden prediction about where college stadiums will go next? Imagine JerryWorld in Texas but instead for Alabama football or Michigan football. Would the big football schools realize some extra revenue or value in being the first stadium to mimic the big pro stadiums?

One thought on “Designing your own Peytonville, Part 4”