A Coldwell Banker insert in the Chicago Tribune included a map and listing of all their Chicago area locations (zoomed in portion below): 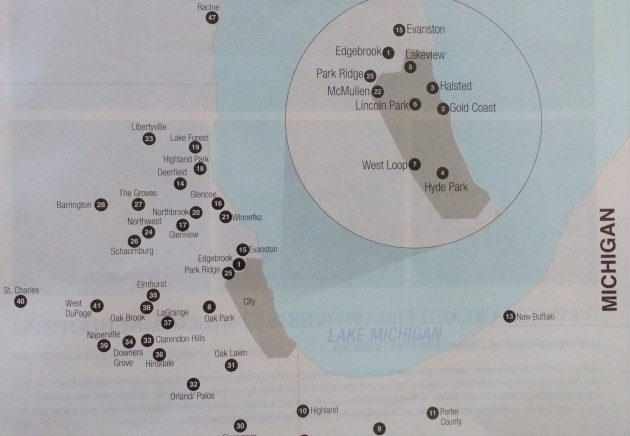 It is easy to see all of the suburban locations, particularly in the north and west suburbs. In contrast, check out the city map. From my count, there are seven Chicago Coldwell Banker agencies. Five of these are on the north side. Two are not: one in the West Loop and one in Hyde Park.

But, the Chicago map does not just show disparate locations. It is not an accurate map. The city is oddly shaped. Let me count the ways:

Perhaps this is a function of making a map with labels (the text all has to fit). Or, this may be about marketing: Coldwell Banker has particular clients and they want to highlight their proximity to those potential customers.

Yet, the map severely distorts Chicago. As noted above, the west and south sides do not fully exist. Recent Chicago maps aimed at particular audiences have done this before. This map also hints at the relationship between real estate practices and decades-long discrepancies in where people in the region live. Real estate professionals are not passive bystanders in residential segregation; they were active participants working alongside lenders and governments. Homeownership today is still not completely a free market and is more available to some Americans than others. Coldwell Banker does not have locations in certain places and this likely has ties to race, ethnicity, and class as well as practices and patterns developed over decades.

(And for those who think I am reading too much into this, my starting position is this: I assume race is a causal factor in American social life until shown otherwise, not vice versa.)