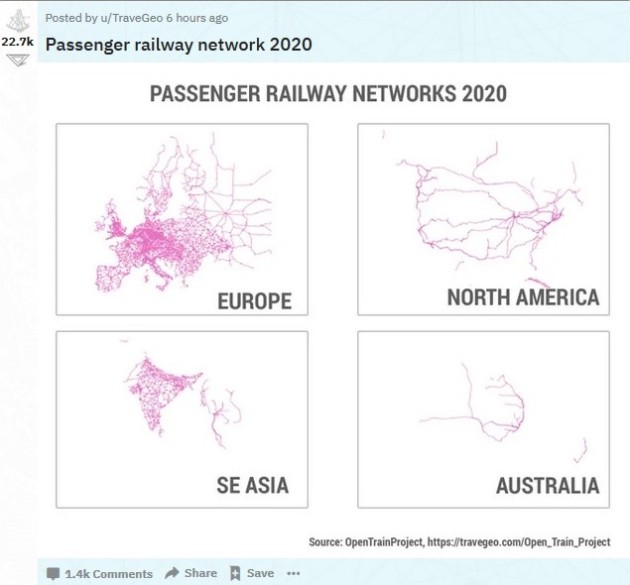 There is a lot that could be said with these maps. When I looked at the North America map, one thing jumped out at me: the centrality of Chicago to the passenger network (and to railroads more broadly). Not surprisingly, given the density of population and major population centers, there are more passenger trains between Washington, D.C. and Boston. The rest of the country is relatively sparse except for the convergence of lines in and out of Chicago. This is partly the result of geography – Chicago’s position at the base of the Great Lakes helps – but also the result of decisions to route traffic and develop infrastructure in and around Chicago and not elsewhere (like in St. Louis or Memphis or Cincinnati or other options). And a lot of rail traffic and freight runs through the region as well.

If a more robust passenger rail system develops in the United States, this map suggests Chicago will be in the thick of it. This would present an opportunity for a city that is already a transportation center with busy airports, crowded roads, and potentially more rail traffic and visitors. It is a little surprising that Chicago and Illinois leaders do not talk more about potential railroad options – consider the decades-long focus on a potential third airport, plans for highways that do not get off the ground, or the slow speed at which railroad congestion is addressed – as this could only add to what Chicago already has.