Check out a new map that shows population by race and ethnicity at a very detailed level: SocScape. Curbed provides a brief description of the project:

Adapting a grid-charting system used for mapping the craters of Mars for NASA, Stepinski and his postdoctoral researcher Anna Dmowska, have created the most detailed map of the United States’ racial diversity—ever. The interactive tool displays enormous volumes of census information through more granular units, each representing 323 square feet. The result is a visual presentation that’s more accurate and useful to analysts interested in exploring geographic shifts in population and racial diversity.

Stepinski is already picking up on trends in the data from the 1990, 2000, and 2010 censes: Generally, white neighborhoods have become more diverse, Asian and Hispanic populations appear to be concentrating in distinct geographic pockets, while largely black neighborhoods have not increased in diversity.

Here is a view of much of the Chicago metropolitan region: 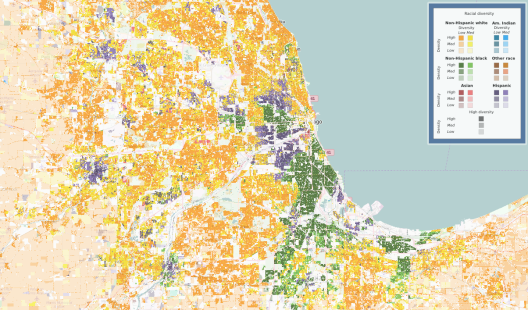 From this image, it looks like an improved version of the racial dot maps as it has more geographic specificity. The tool also has some added data layers – here is the same region with the 1990 race and ethnicity data:

Quite a bit of change over a twenty year stretch with increasing numbers of non-white residents living in the suburbs.