A Bloomberg story looks at the rise in birth in the United States outside of marriage and has this headline:

And then the story quickly gets to the data:

Forty percent of all births in the U.S. now occur outside of wedlock, up from 10 percent in 1970, according to an annual report released on Wednesday by the United Nations Population Fund (UNFPA), the largest international provider of sexual and reproductive health services. That number is even higher in the European Union. 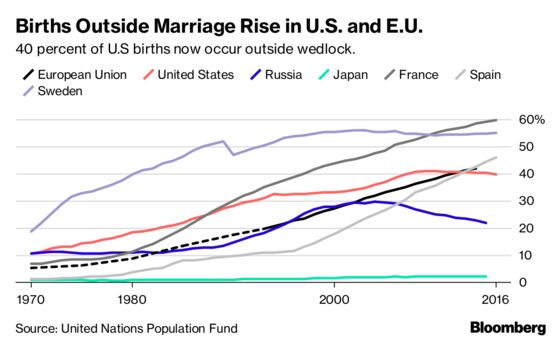 There is no doubt that this is significant trend over nearly 50 years. One expert sums this up toward the end of the story:

The traditional progression of Western life “has been reversed,” said John Santelli, a professor in population, family health and pediatrics at Columbia’s Mailman School of Public Health. “Cohabiting partners are having children before getting married. That’s a long-term trend across developing nations.”

I think the reading public would better served by either using the 40% figure or saying “Two-Fifths.” Or, perhaps the headline might speak to the 30% jump in nearly 50 years.

In the grand scheme of things, this is a minor issue. The rest of the story does a nice job presenting the data and discussing what is behind the change. But, this is a headline dominated age – you have to catch those eyes scrolling quickly on their phones – and this headline goes a bit too far.