A slideshow of failed tourist projects includes The Worlds project in Dubai:

This artificial archipelago of small islands was dreamt up by Sheikh Mohammed bin Rashid Al Maktoum, the ruler of Dubai, to look like the map of the world. And his hope was to turn the World Islands into the playground for the rich and famous. Construction of the 300 islands — made entirely of dredged sand — began in 2003. But when the financial crisis in the real world, it brought production of this $14 billion-dollar fantastical world to a halt. To date only two of the islands have come to fruition. 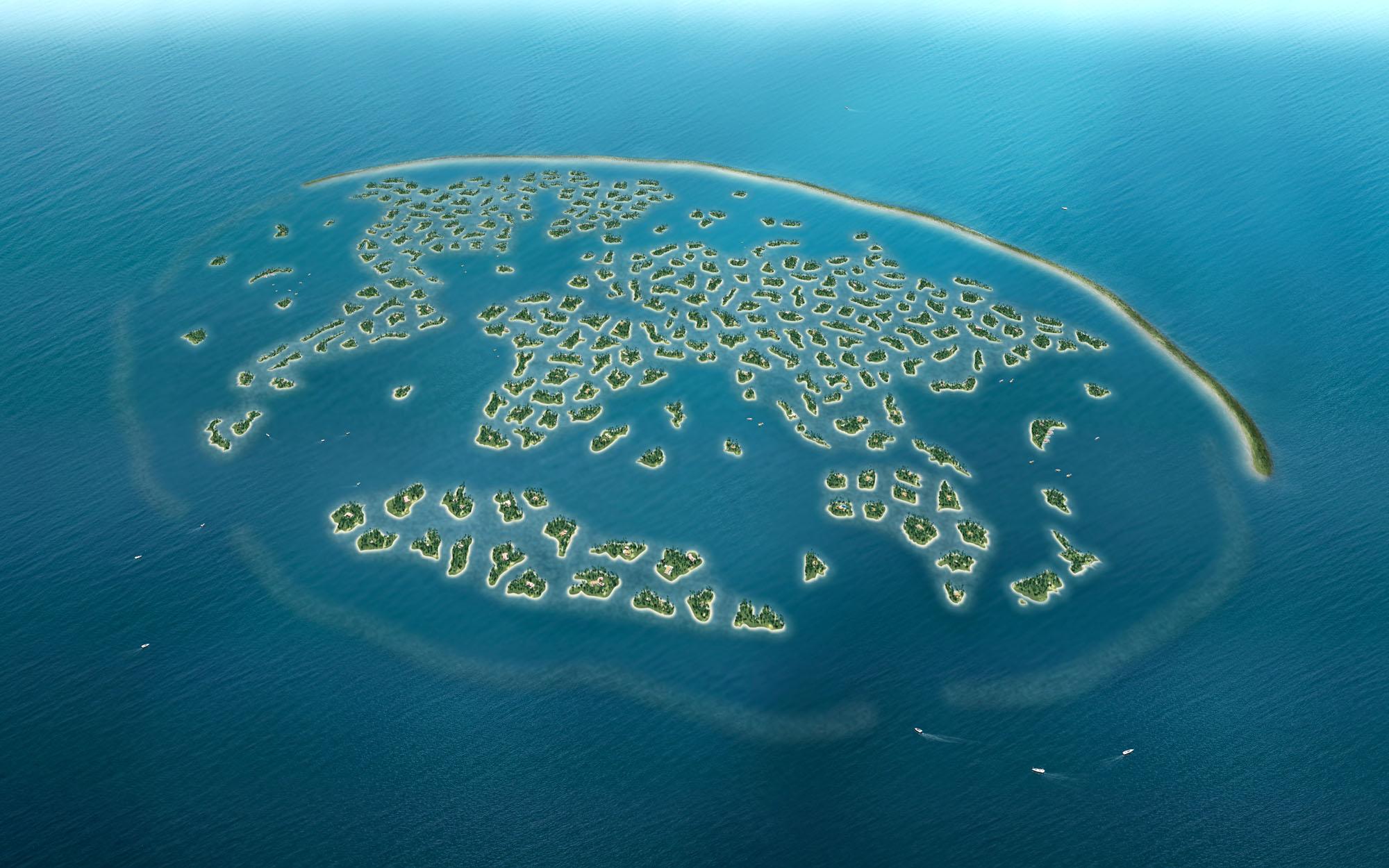 It looks cool but it is hard to imagine (1) how much money and work it would take to finish such a project and then (2) who might purchase all of these unique properties.

But, if it did all go forward:

1. Who would purchase what spots in the world? Who wants the awkwardly placed Antarctica?

2. Does the development allow connections between the locations? How about bridges only where Risk lines are drawn?

An architecture class at Rice University developed an idea for a floating city for oil workers that may be built off the coast of Brazil in a few years:

The newer discoveries push the limits of normal helicopter range. That means getting to and from work on the oil platforms is both expensive and a grind. So the Brazilian oil company Petrobras is looking for a new, better way for its employees who must work on these platforms…Their solution seems right out of an Arthur C. Clarke novel. The class designed three large floating islands that are surrounded by 42 smaller islands. These smaller islands would provide the larger hubs with among other things, crops and electricity through solar and wave power. The three main hub islands would be as large as 1 kilometer by 2 kilometers [0.6 by 1.2 miles] and would be a mix of residential, office and industrial centers…

“With the ballasting techniques, not only can you raise and lower the island by the ratio of water to water, they also have techniques now for digitally sensing wave levels and these things are constantly being calibrated,” Bhatia says. “So the technique of using digital stabilizers that are constantly reballasting the tanks would be what was employed.”

The three hubs would serve as oil transfer facilities, pumping the offshore crude back to the coast through three large pipelines. The hope by Petrobras, the Brazilian oil company, is to build and have operational floating residential islands in the next five years. Just how much of the Rice students’ elaborate concept ultimately might be realized is still unknown. The company’s project is in its early phases on the drawing board.

It sounds like there would be a lot of work to design these but the idea is interesting. Oil companies might be one of few organizations that could pull this off given the resources and money needed, the expertise on hand (oil rigs are complicated in themselves), and the return on investment the islands might provide.

Additional questions I would want answered:

1. What is the maximum population for such islands? The article suggests 25,000 people – is this the maximum weight that might work or are there other considerations?

2. What would the life-span of one of these islands be and what happens when things start breaking/leaking/falling apart? (How many lifeboats have to be on hand?)

3. While oil companies may have the most interest now, how long until someone builds one of these for any number of reasons (pirate traders, people who want to live outside national borders, multinational corporations who want to be truly offshore, countries seeking military bases, etc.)?

From this Guardian UK article discussing Greece’s efforts to lease or sell island property to help fill its national coffers, I clicked through to this website: Private Islands Online. Even with a weak economy, why not pick up a 12.5 acre island in the Florida Keys for $17 million? Or how about a 3 acre island in the St. Joseph River in Michigan, just an hour or so from Chicago?

And for those who are a little worried about their budgets, don’t worry: there are some beautiful islands for rent.