Yesterday, I summarized the redevelopment plans for the East Roosevelt Road Corridor in Wheaton and the Giesche Shoe project in Glen Ellyn. Based on online sources, I will summarize the concerns of residents. There is a common theme: they perceive the character of the community is at stake. 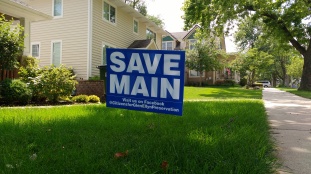 In Wheaton, here are some of the stated concerns:

“We are a residential city, and our city planning should reflect that,” she said. “A forward-thinking city understands that pedestrian-friendly sidewalks and bike lanes are what attract new homebuyers, keep residents, increases equity for current homeowners and subsequently increases city revenue based on increased home value and an increased tax base.”

Nancy Flannery, the chairwoman of the city’s historic preservation commission, worries about the possible demolition of another Jarvis Hunt-designed house, now converted into offices at 534 Roosevelt. Built in 1896, the house was one of the first summer cottages constructed for members of the private Chicago Golf Club.

And a few more representative comments from the same May 28, 2019 meeting:

expressed concern that the proposed changes would build up retail, contribute to congestion and be detrimental to neighboring residents. He stated there are already vacancies and the report is not clear on what types of businesses would be interested in Roosevelt Road…

stated he thinks the plan as presented harms the neighborhood in terms of traffic, safety, noise, light and visual aesthetics, and he doesn’t think there is a problem on Roosevelt Road that needs fixing…

In Glen Ellyn, some representative comments from an online petition:

It’s going to ruin the quant village that we choose to live in. We want to live in a village not a city with large structures – we would have chosen to live in Wheaton Or Naperville ( village is the key word – we are not a city Or town. We are the Village of Glen ellyn )…

a number of villages used to have charms that brought shoppers and new residents (e.g. elmhurst, arlington heights, mt prospect). their boards allowed developers to build in violation of existing codes and these charms were lost. don’t let that happen here…

My husband and I moved here because the town was still lovely, quiet, and mostly unmarred by the huge, unsightly, commercial behemoths scarring most of the surrounding suburbs. Glen Ellyn still has charm and an organic feeling of development. This development does not fit in at all with the feeling and aesthetic of the town. Say no!

In both cases, the concerns residents voiced are consistent across hundreds of development and redevelopment projects in suburbs across the United States. Having studied this in multiple ways (several of my projects address similar issues including “Not All Suburbs are the Same” and “‘Would Prefer a Trailer Park to a Large [Religious] Structure’“, residents generally bring up the same concerns: increased traffic, lights, and noise; a change in scale (particularly when it comes to height); and threats to residences (usually single-family homes) and the character of a suburb.

In Wheaton, the character issue is not stated as clearly but it is present. This major road is one of the primary ways people see the suburb. How should it look compared to the stretch of Roosevelt on Glen Ellyn which is more like the strip mall approach and Winfield to the west which is more green and residential (and not coincidentally they are fought their own battles over taking advantage of possible business opportunities on such a busy road)? This is not just about a busy roadway or the homes that back up to this stretch; this is about signalling what kind of place Wheaton is. One that values businesses or homeowners, one that prioritizes vehicles or pedestrians, one that celebrates its history or is looking to simply make money?

Interestingly, Wheaton comes up in the Glen Ellyn comments as a place that some Glen Ellyn residents do not want to become. Since the late 1990s, Wheaton has pursued downtown condos and office buildings. Other suburbs come up in the comments including more lively downtowns like Naperville and Arlington Heights. These Glen Ellyn residents have some similar concerns that most redevelopment projects engender – traffic, noise – but this particular project seems to be a step too big for their downtown. Can five stories “fit” with the existing downtown? This is not just about seeing the building from a distance: it is about a sense of scale for pedestrians, how the building might tower over nearby businesses and residences, and what this portends for the future of the downtown. Let this big development in and Glen Ellyn will become just another suburban downtown chasing after tall buildings and money to the detriment of residents who liked to feel they live in a small town.

Perhaps the big question here is this: are these concerns from residents valid? Are these just NIMBY responses? Who should control what kind of development occurs in a suburban community? Americans like suburbs in part because they feel like they have access to local leaders and can influence local decisions. From my own research on suburban communities, I am fairly convinced there are some suburban residents who move into a neighborhood and community and desire to freeze the place in that exact configuration. Indeed, they moved to the suburb for particular reasons. On the other hand, cities and suburbs are encouraged to grow (stagnation or population loss is failure) and development or redevelopment opportunities do not always come along easily or in forms that local officials or residents will like. If these communities do not act now, will they lose economic opportunities to other suburbs and in the long run shoot themselves in the foot by not upgrading when they can?

If local residents are vocal enough, they can likely slow down or nix these redevelopment projects. How many residents have to voice displeasure is not clear; few suburbanites are invested in local politics even if they count on the opportunities to voice this displeasure to protect their own investments. Local officials do listen and will encounter difficulty down the road if they just ram through projects.

Here is what I suspect will happen in the long-term in these two cases (and in suburban disagreements over development and redevelopment generally): few communities are so anti-development that they keep out all changes. Suburbs generally hope to keep growing and this becomes more difficult in more mature suburbs like these two which cannot add new subdivisions. There are only so many ways Wheaton and Glen Ellyn can add businesses and residents. If these changes do not happen now, they will probably happen eventually as the opportunity costs are too steep: local leaders will have a hard time turning down these chances when the possible consequences are lost money, vacant properties, and eyesores. Some local residents will dislike the changes and some might move away. But, the very conception of suburbs may be evolving as well: outside of moving to exurban areas, many suburbs are pursuing more density and vibrant downtowns. This may make suburbs all the more complex in how they are understood and experienced and in how residents think of their community’s character.